We’ve had a lovely day. I picked up a badminton set from Aldi a few weeks ago so we set that up and had a family game! I think I need to invest in some decent shuttlecocks though as they are a bit cheap and nasty so go a bit wonky all the time.

I then decided to take the kids for a walk and explore in a direction we hadn’t been before along the sea front. Louis took his scooter and Josh his ripstick. You can just about see Josh’s head rounding the corner in the distance! 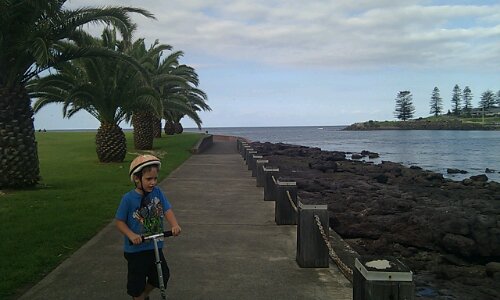 This is a view of Kiama’s little harbour – so gorgeous. The famous blow hole and old lighthouse is on the far side of the hill. 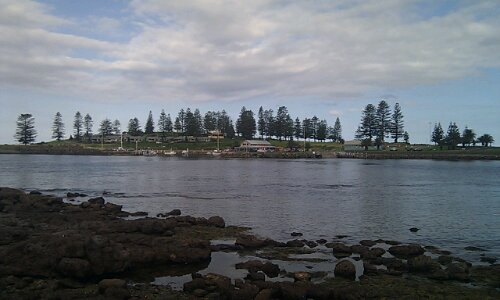 When we got to the end of the path we discovered a rock / ocean pool that I didn’t know was there. They wanted to go in and as summer is coming to an end I decided to let them! As you can see from Josh’s face it was a bit nippy so they didn’t stay in too long!

Ahhh lovely end of summer days, not too hot so you feel like getting out and about!

I hope you have all had lovely weekends too xx

Sorry for the total lack of blogging in the last few (many!) months. Life has been crazy.

September saw the last of my clinical placements (including lots of night shifts which really tipped my sanity over a bit!).

October brought my final assignments and exams for my nursing degree (enough said!). It also involved a lot of soul searching and many days / weeks of discussion and heartache and tears, which cumulated in us making the decision not to move back to France at this stage. The political and financial situation in Europe at the moment is just too scary (even with the strong Aussie dollar making it in some ways more appealing!). My qualifications wouldn’t be recognised so I would be back in the situation of not being able to have a decent career and we decided that the risks of everything going pear shaped just outweighed our love of France and the life that it offers us at the moment. On the positive side this spurred me to follow my almost life long dream of becoming a midwife and I applied (and was accepted) to start my Masters of Science (Midwifery) at Wollongong University (I had my first class today!).

November had the last of my exams (woo hoo!) and I was thrilled to come out with a Grade Point Average (GPA) of 6.0 – this is an international score out of 7.0 and to put it in perspective I needed 5.5 to get into medicine in Queensland! So I was thrilled with the results and pleased that the hard work paid off! We decided that we needed to make a trip back to the UK and France so planned that around our departure from Hervey Bay. Within about 10 days of my exams finishing we moved out of the house there. We had a garage sale to get rid of the furniture and gave our boxes to a removalist to deliver to my sisters garage in Sydney. We cleaned until 7.30pm on the last night then with the car ladened with boxes and towing a trailer we set off for Brisbane airport, stopping late at night in a hotel in Caboolture to get some sleep. Joel dropped the kids and I early next morning at the airport to fly to Manchester (via China and Holland!) and carried on with the car and trailer to Sydney which he then flew out of a few days later! We had a fantastic trip which I’ll blog about very soon.

December was spent visiting friends and family in the UK and France (and shopping of course!) I’ll fill you in on that soon.

January we returned to Oz and spent the month searching for a/ and area that we liked around Wollongong and b/ a house for rent that we could afford among the handful that where available. We fell head over heels in love with Kiama and Kiama Downs but I held little hope of securing one of the 2 houses that we liked, could afford and were available as each had about 8 other couples at the viewings! We were thrilled to get a call about the house that we are now in that was J and the kids first choice! It has issues (like being on the steepest hill you have ever seen, no garage, a bit flight of stairs down to house then back up to get in, no storage and cathedral ceilings (am thinking freezing in winter!) as well as a garden that needs a lot of TLC) but it is all made up for by stunning sea views from the wrap around deck and the whole of the open plan living and dining room! Will do a post with pics and more details!

Early February we moved in and the rest of the month was spent getting the kids settled into the local school (WOW I love it and have even joined the P and C (or PTA as you may know it)!), finding furniture, fridge etc. When my lovely mother in law asked what I wanted for my birthday when we were in England I said that I wanted to be in my own house and spend the evening on my sofa. Well we moved in 2 days before my birthday and we didn’t have a sofa but spent the evening on the deck looking at the sea, with mum visiting, a takeaway Chinese and and bubbly – bliss! We still don’t have everything but we have the basics so that is the main thing and we are comfortable and happy :).

Uni has just started and I’m in the process of finding some nursing shifts and still getting organised but life is good!

I’ll be back soon – promise!

Oh dear my blogging is a little random and I’ve obviously not kept up with it as I’ve just found this post in drafts!!!

Mum came for a visit back in September when we were still living in Hervey Bay and we had a girly day and went whale watching – it was fab – we went on a nice boat that only had about 40 people on it (as opposed to the big one we went on last time that had over a 100 but was great for toddlers at the time!). I thought I’d share some pics of the day.

Here was one of the first whales that we saw: 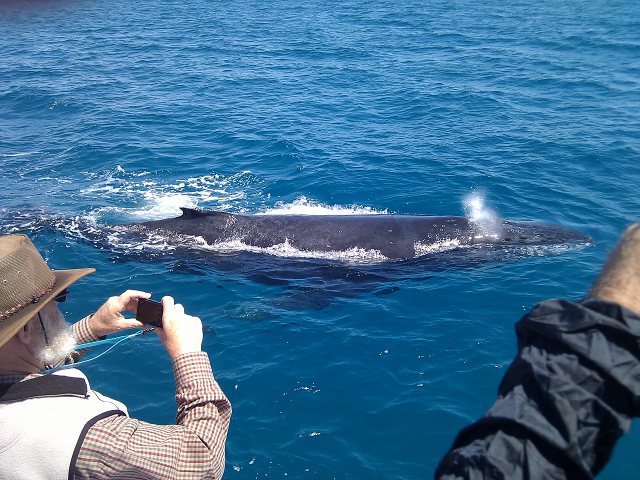 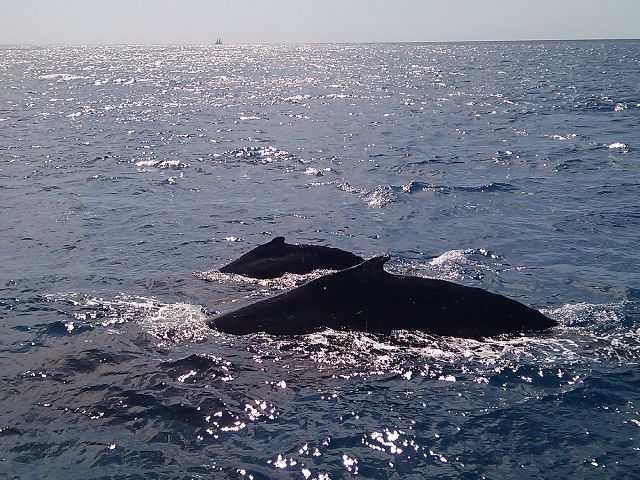 Here is the first time I saw whales actually breaching – there was a clipper ship that sailed over to see what was going on, it was very cool and came quite close. The splash was the whale hitting the water – was so hard to get the timing right and I’d stupidly forgotten my camera and only had my phone!: 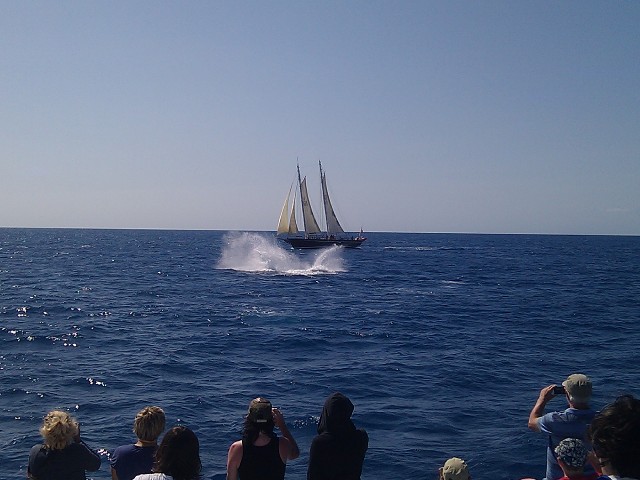 Luckily we had a great time with a lovely couple from Sydney who were kind enough to send me a great shot that they took with their fantastic camera, I can’t stop looking at the photo and remembering how magnificent it was to watch in real life: 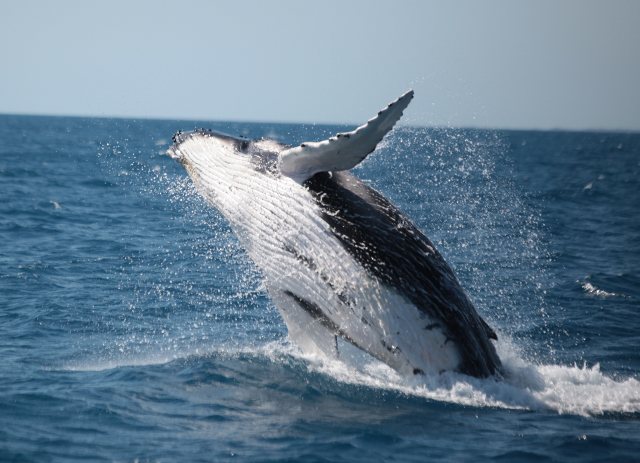 The boat itself was a big cruiser – you could easily and happily live aboard with a great kitchen (sorry mum – galley!), bathroom, 2 en-suites to the main bedrooms, big living areas and great decks fore and aft. 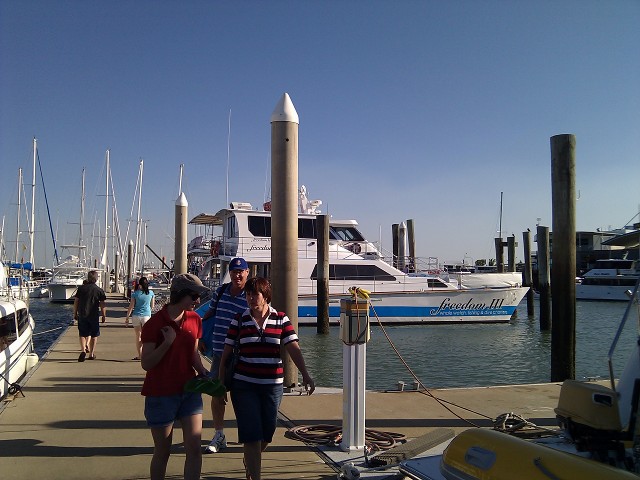 If you ever get a chance to go whale watching please do it is good for the soul!